Gentlemen, these are one of my favorite pairs of Intymen briefs. Sizing is spot on and they are super sexy and comfortable. 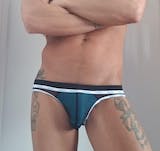 Gentlemen, these are one of my favorite pairs of Intymen briefs. Sizing is spot on and they are super sexy and comfortable.

Product has been added to your wishlist.
You can view your wishlist by creating or login account.
Please create account through ##customer_email## email
Login Register
20